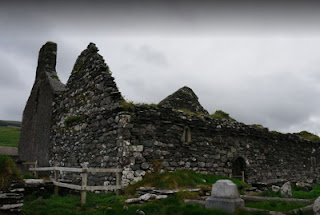 On our drive through The Ring of Kerry, in southwestern Ireland. we stopped at an interesting ruin of a church and cemetery with rolling mountains on one side and a beautiful bay on the other. Sheep were feeding on the pasture surrounding the medieval site.  It is called the Glen Church Ruin. 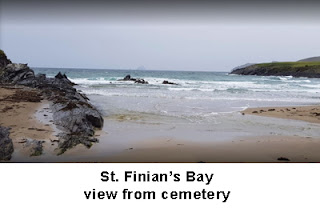 The sky was gray. The wind and drizzling rain were freezing cold and could blow you over the cliff if you weren't sure-footed. Looking seaward from the cemetery, we could see a charming, small bay, St Finian's Bay. It was a shame we couldn't find out anything more about the history of this ruin site. We did learn that it was built during the medieval time...by hand! Those who toiled in this horrendous weather would have been very hearty, indeed, especially carrying the supplies up and down the rock-strewn hills. 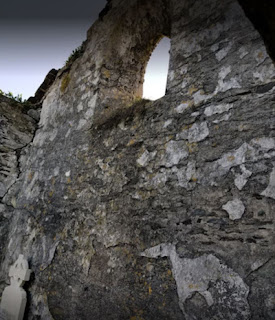 We were told the howling winds and dampness apparently were pretty normal for this area. We talked about the eeriness of the church and cemetery during dinner that night. If only the rock walls could talk! 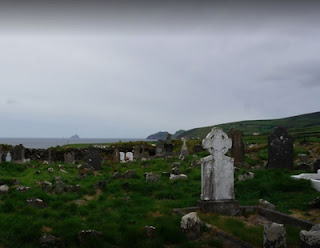 We came up with a fantastic way of using a church ruin site for a scene with our characters in Stone Pub.
Posted by Janet Lynn at 10:43 AM