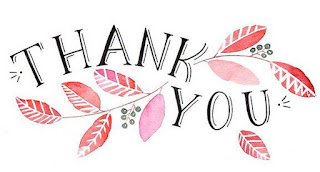 A Cyber Thank you

2017 has been an amazing year for our Author Series. It was great traveling and presenting with fellow authors all year. We've traveled, met and made so many newfound friends: authors, fans, reviewers, bookstore owners and editors.
In the spirit of Thanksgiving, we'd like to thank those who hosted me and Will this year: 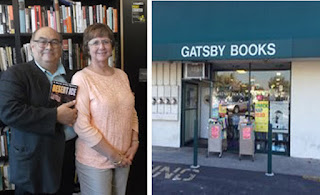 February 18, Saturday,  Gatsby Books hosted our book launch of DESERT ICE, A Skylar Drake Murder Mystery. It was wonderful to see many friends and supporters. 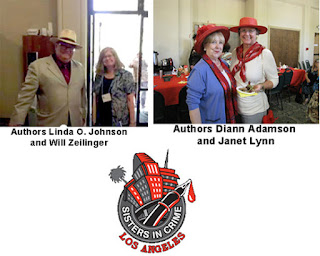 April 2 we participated in an International Tea, hosted by Sisters In Crime/LA Branch held at the South Pasadena Library. We had our tea leaves read, all good stuff! 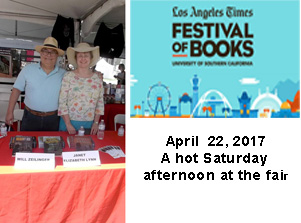 Also, this year was our third year participating in the Los Angeles Times Festival of Books. Hosted by Sisters in Crime/LA Branch.

May 1, Monday,  was the perfect month to be a part of the Grand Re-Opening of the Glendale Central Library. Will read from DESERT ICE and Janet participate in a panel discussion.

On June 10, Saturday, we joined in the California Crime Writer's Conference. We discussed the role of Social Media for authors.  It was a lively discussion with an audience full of authors.

The following day, Sunday, Will and I participated in the  El Segundo Public Library Author Fair.  We presented with a group of authors discussing the amazing works of the 1950s authors:  Ross Mac Donald,  Dashiell Hammett, James M. Cain, Raymond Chandler, Erle Stanly Garner, and others.

Bookworks in Albuquerque, New Mexico began carrying our Skylar Drake Murder Mystery Series.  We are expanding our book series throughout the Southwest.

Our launch party for Chicken Soup for the Soul: Dreams and the Unexplainable was hosted by Gatsby Books. We presented with two other contributing authors who have short stories in the book.

Our second event, October 25, Wednesday, was The Lit Crawl. It's a Walkable Smorgasbord of Over 40 Literary Happenings in NoHo Arts District Locations in one Night!  Our event took place at the Blastoff Comic Bookstore. We had a fun audience.

Will was invited to participate in a panel at the American Association of University Women (AAUW), E. San Gabriel Annual Luncheon. He was one of five authors discussing An Author's Guilty Pleasure:  An authors guide to plotting crime. Authors l to r: Nancy Cole Silverman (moderator), Pam Samuels Young, Will Zeilinger, Jill Amadio, and Shannon Muir.

Thank you again for a wonderful 2017!

Posted by Janet Lynn at 4:28 PM No comments: